Asif Khan’s memoir “Tracing My Footsteps” begins with a remembrance of his early days memories in Meerut, India, when professional drummers would arrive at your door to beat the drums to announce wedding invitations. Born in a house built in 1760, the author describes the long-lost traditions of family life - the decorum, lifestyle, dressing, storytelling, social and moral obligations - and the role of servants within the family. He describes how events were created, food prepared and guests served.

The memoir describes the life of the neighborhood, a settlement that was established hundreds of years ago, still in its original shape at the time of the author’s birth. The author recalls how the day started with the vendor’s voices, the children playing on the roads, pedestrians taking water from the hand pump at the roadside, and how the beggars would make their daily calls. The author’s forefathers played a vital role in the town, settling all disputes and marriages within their realm.

There are portraits of colorful local characters, like Sanjley, who rented out a bed in his room to a man called Munshijee for a daily payment of four paisa (Sanjley would use that four paisa to pay for his daily milk.). Munshijee, who regularly took opium before bed, one night told Sanjley that he did not have the money and would pay it the next day; he took his usual dose and went deep into his sleep. Sanjley, who did not get his milk that night, fell into a foul mood and woke up Munshijee to begin a fight that woke the entire neighborhood.
From this time of childhood, the memoir then moves to a textile mill in a small city in Pakistan, where the author spends the next ten years. Here, famous poets from all over the world were flown in to the mill town to recite their poems, and stage plays and other entertaining programs were organized for the workmen and their families.  In Pakistan, the author encounters a different way of life from the one he left behind in India. We learn how the love affairs were developed in a society which did not allow interaction between boys and girls. The memoir describes the author’s education, fond summer memories, friendships and youthful pranks.

Next, the memoir details the author’s entrance into professional life, where he traveled to towns in remote areas in the course of his job, meeting more interesting characters in places where he knew not a single soul.

The author gets married and goes on his honeymoon to London, where he and his wife encounter surprising and frightening episodes. The young married couple gradually made the house their home, living in a penthouse, which proves to be a blessing and a curse, and start a family.

Asif relates his close ties to his siblings and their families, how they got together every weekend and enjoyed food, watched movies, and shopped, and the lost he felt as his siblings passed on, one after the other.

The book details the author’s extensive travel to foreign countries, with colorful anecdotes. While having a poolside dinner at a Bangkok hotel, one of Asif’s colleagues steps backward and falls in the swimming pool with a dish full of food in his hand and travel documents in his pocket. Someone, within the group floats the idea of using a microwave oven to dry the passport. Once, while on a visit to Turkey, the author was left alone on 9th floor of Galata Towers in Istanbul, a building constructed in the fourteenth century, which proved to be a scary experience. The author searches for tea in Istanbul and gets a surprise instead.

​Tracing My Footsteps is the story of life with colorful anecdotes and characters, a story that moves through different time zones, places and cultures. It describes a culture within the family, a culture within the neighborhoods he lived, and a culture within the society as a whole. In the last chapter, the author describes his emotions and feelings, learned from this rich life and his desire to revisit the house where he and his forefathers were born, to relive his childhood, and cry in solitude for number of days he would be there for all that has gone. 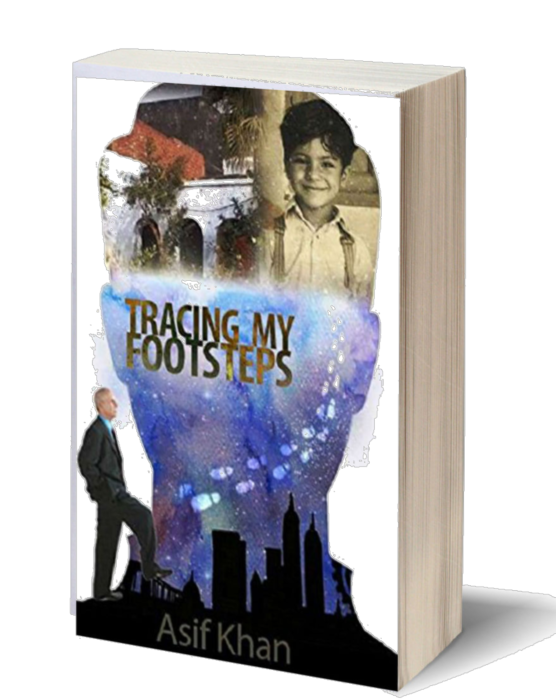 This is should be a prospective customer's number one call to action, e.g., requesting a quote or perusing your product catalog.